REPLACING THE LP FLEX LINES IN AN AIRSTREAM INTERSTATE

This is a follow-on to this post in which I described a propane fill line failure in a friend's 2007 Airstream Interstate Class B RV.  As is often the case with RV repairs, I've gotten conflicting information from different sources, and after I publish this post, I'll go back and amend the other to reflect what I learned in the interim.

We decided to proceed with a DIY removal of those line segments of our propane distribution system that were not copper.  Our Interstate actually contains a mixture of copper (to refrigerator, hot water heater, and furnace - lines that penetrate into the interior of the living space are reportedly required to be made of copper), braided flex (fill and overfill, and to Onan generator), and solid flex (internal distribution segment) lines.  The braided flex lines were of three different diameters and were manufactured by Parker.  The solid line includes a tag indicating that it was manufactured by Marshall Gas Controls.

Note our DISCLAIMER for this kind of DIY work.  If you screw up working on your LP system, you could kill yourself.  Don't do any work if you don't have confidence in your abilities.

These were our steps.

First, I did a total burn-down of the LP tank so that it would be completely empty ahead of this job.  I ran the generator until it coughed out of operation from running out of gas.  Then after it quit, I cranked up the stove burners and watched the flames slowly shrink and sputter out.  Then I opened the residual lines to vent any remaining wisps of gas.  This step may not be strictly required on a rig such as ours, but I don't feel comfortable working with a tank full of flammable gas.

Second, I switched off the LP solenoid.

Third, I labeled the lines to be removed. 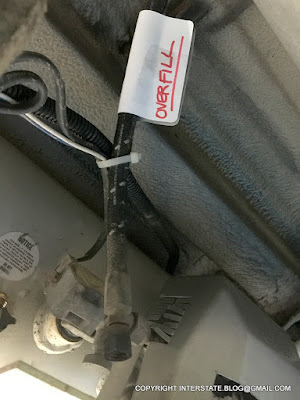 Fourth, I took a lot of photographs of the way that everything was connected (see above).  We could probably remember what went where, but why trust memory alone when the cell phone is right there in the pocket?

Fifth, it was then necessary to dismount of the lines.  My husband did this part, as brute strength helps in the process.  Plus he has far more general "working on cars" experience than I do, so he knows what things are supposed to feel like.  If anything abnormal manifested in this process, he'd be better able to detect it.

Line dismounting was not as easy as it could have been for two reasons.  Number one, there's the chronic issue of working in very tight spaces under the Interstate.
Number two, these lines were all in place for ten years and very well married to their fittings - getting a few of them free was no easy task.
This is best done as a 2-person job for this reason:
For some reason, the most challenging line was the one to the generator.  That took a good 20 minutes of patient work to free.

Sixth, we isolated those fresh, shiny threads from weather and road grime by cutting the fingers from nitrile gloves and using elastic bands to hold them on all exposed nipples.
Seventh, I freed the lines from their various chassis clamps. 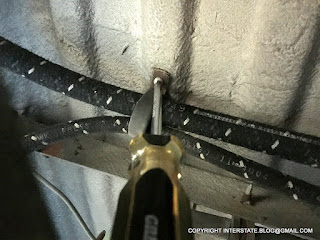 Lines were thusly removed.
Eighth, I cataloged my removed lines.
I was going to take them to a Parker authorized dealer to have them replicated, but I wanted to make sure I retained the essential information because I had no other go-bys.  If something happened to these lines, if they got misplaced or whatever, then I'd be S.O.L. and somehow would need to start from scratch.  My specs were as follows (outer diameters, or ODs, measured using an calipers):


That last one appeared to be an off-the-shelf product, but I couldn't find that exact number on the internet and I didn't know if the "close" numbers represented the same spec.  For non-consumer items, sometimes internet listings can be vague and incomplete.

Ninth, I took those neatly-bundled lines over to the hose-maker.

Tenth, a few days later, I retrieved the new lines from said hose-maker (and paid him, of course).
Eleventh, I re-installed and re-clamped all the hoses.

Twelfth, I had my husband check that all lines were secure.

Thirteenth, I checked the lines again, as a few weeks had passed between the re-installation and the impending propane fill.

Fourteenth, as we were en route to the propane filling station, I recited the following:
Fifteenth, we filled the tank with propane, keeping the solenoid valve closed even after the fill was completed.
Sixteenth, we came home, opened up the solenoid, gave her the smell test, and tried the appliances.
Seventeenth, with it having passed the smell test, I proceeded to crawl under the chassis for a more detailed leak assessment.
Crawling under the chassis in the absence of ramps was pure Suckville, especially with the exhaust train being blistering hot as we'd just driven back from the propane station.
I stayed under there for about 10 minutes, waiting to catch of whiff of the slightest leak of propane or maybe see a bubble form, but nothing happened.

This wasn't exactly a relaxing project, and I'm tremendously relieved to see it completed.

Posted by Interstate Blog at 6:32 PM

Email ThisBlogThis!Share to TwitterShare to FacebookShare to Pinterest
Labels: MAINTENANCE