Every good project starts with an inspiration photo.  This cluttered and inefficient image from last summer was mine:

That photo shows the laundry drying under the awning by being stuck to the side of the van with individual magnets.  And it shows a wilderness-built cooking table (which should be kept next to the fire pit) being used to hold what our little folding aluminum camp table is too small to accommodate.

You might wonder why, in an infinite sea of trees, I'd choose to stick laundry to the side of the van for drying.  Well, in that part of the world, rain showers come frequently and without warning.  It is simply more effective to stick it under the awning where I do not have to worry about it getting soaked unexpectedly.

I decided I would build a sideboard to serve both of the identified needs - to provide more storage for pots, pans, drinks, condiments, etc. during meals, and to double as a drying rack for laundry.

There was no doubt in my mind about what material would comprise the sideboard - I used the same perforated aluminum out of which I'd constructed our under-cabinet suspended shelves, our Lagun table, and the ventilation cover on our lithium battery chamber.
Here's a photo tour of this project, including sourcing.
Given that this device was intended to hang on the exterior side of the van, there were a couple of unusual operational considerations.

First, the sideboard had to be strong enough to support at least 10 pounds of stuff without either falling off or skidding down the side of the van under the weight.  To support the main mass, I used the same "skyhook" magnets as I had found to be effective for the awning screen surround that I designed a few years ago.  These are rubber-backed and, as long as you observe good neodym hygiene, your scratches should be minimal.

By "hygiene" I mean, do NOT leave these things lying around.  They will pick up every speck of magnetize-able dust and every iron shaving that they can find within about a one-mile radius.  It's not really the magnet itself that has the potential to scratch your paint - it's what gets trapped between the magnet and the van.  They have to be kept very clean, which is a challenge given the power they exert on their surroundings.
The hooks look like this in application - just a simple knotted loop to keep the suspension lines in place.
Second, obviously I could not have a bare cut aluminum table edge bumping up against the side of the van - that would be a disaster for the paint.  The body contact had to be with a soft non-abrasive surface.  My husband and I first used a jigsaw to round the corners of this sheet (for visual consistency with the Lagun table) and then I edged in in Dritz 1" charcoal gray polyester belt webbing, which is the same treatment I had given to the Lagun top (belt webbing has about a million uses in a van).

Third, for similar scratch-prevention reasons, I could not allow any suspension hardware to touch the van, so it had to be inset.  The beauty of perforated aluminum is that it provides an infinite number of possible configurations without the need for drilling holes.
I used one of those D-rings inset into each rounded corner.  In order to make for easy assembly, disassembly, and storage, I decided that the suspension lines needed to be detachable, so I used Strapworks' half-inch miniature bolt snaps at the four corners.  The tiny bolt snaps will remain connected to the lines at all times, whether in use or in storage. 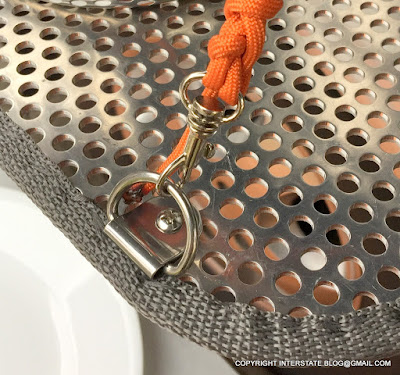 My suspension lines are made of orange paracord.  In the realm of artistic design, ordinarily one might not choose to combine orange with the garnet color of our rig's side stripe - those two don't necessarily go together.  But the orange design element was already present in the form of reflectors and the signal glasses on the van.  If you can't beat 'em, join 'em - I ran with safety orange in getting an CG Gear sand-free mat (I cut an 8' x 8' into two halves and re-edged the cut seams, also with belt webbing) and in using the paracord.  I also like the photo ops that this combo provides in cross-referencing camp fires.
Getting those lines the correct length took a long time and many careful iterations.  The van body is curved, plus in my driveway it was parked on a slope, so it was basically impossible to get it level in situ.
I achieved level by hanging it on the side of my upright freezer and working on it there, given that the freezer was more conveniently plumb and level. 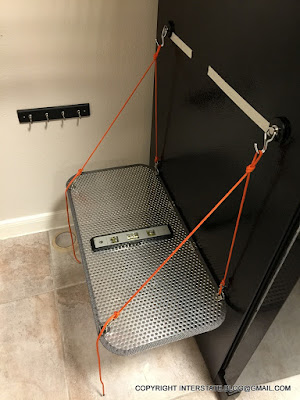 In order to keep the table from slipping fore and aft when it hangs on the side of the van, I used orthogonally-magnetized neodyms as "keepers" on the edge of the sideboard that fit into the van's lateral body groove.  By this I mean, the north and south poles of the magnets were oriented out the sides, not out the top and bottom face as they typically are.
I needed two of those 2-hole countersunk block magnets to stabilize the edge that was up against the van body.  For better and for worse, each of those blocks has a 17-pound pull force (smaller ones were not available with sideways magnetization).  Trust me when I say that this table is not going anywhere.  I could probably drive at freeway speed with it in place, having 2 x 64-pound suspension hooks and 2 x 17-pound lateral stabilizing magnets on it!

Here's what one of those countersunk blocks looks like in place.  Note that the edge of the table snugs into the Sprinter's body groove, as I mentioned above.  That allows the side-mounted neodym block to get close enough to grab the metal, but the majority of the force is exerted by the web-woven table edge, to minimize scratches.

Here are a couple of money shots of the table in place.

The sideboard is easy to reach from those "butt bucket" REI camp chairs (aka Flexlite chairs) that we typically carry lashed underneath our under-cabinet suspended shelves:
When it's time to dry laundry, I simply raise this sideboard up and suspend it from the top of the van body.
It was windy when that photo was taken; you can see the clothes being blown forward a bit.  I'm using well-rated folding travel hangers for this hanging purpose.  The points do not insert into the perforated aluminum holes, but they do catch in the edge of the holes, so in light winds, they won't blow off.

The sideboard's drying utility is not just limited to hanging.  Because the perforated aluminum is 40% open space, socks, gloves, etc. small items can be dried on top of it while the other items hang underneath.

When I raise the sideboard up high as shown above, the countersunk neodym side magnets will no longer touch the van's steel side body because the windows sit proud of the van.  I solved that issue by using a KJ Magnetics plastic-coated disc as follows, in order to keep the sideboard from swaying in the wind (the clothing could act as sails) and potentially scratching the windows:
We used Slide-co spring-loaded mirror clips to mount this table for storage.  At long last, I have something to break up the monolithic appearance of the butt end of this galley cabinet.  I've always found that orange atrocity to be a visual distraction.  With its Lagun table big sister hanging nearby (the Lagun top stores on our wet bath door), the sideboard looks like it was intended to be in this space all along.  The space finally appears visually coherent and complete. 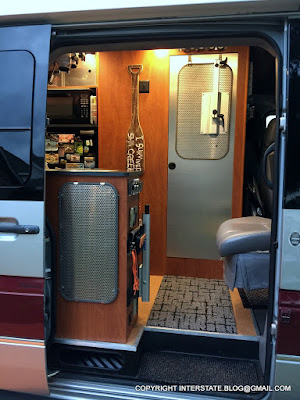 Close up:
You'll notice that I detached the suspension lines and hung them a few inches right of this sideboard for storage.  The two neodym suspension hook magnets are right above them.

Next will come the off-grid road testing of this new asset, but our big trip won't be for a few more months.  All of my current projects are in preparation for returning to this little piece of paradise: 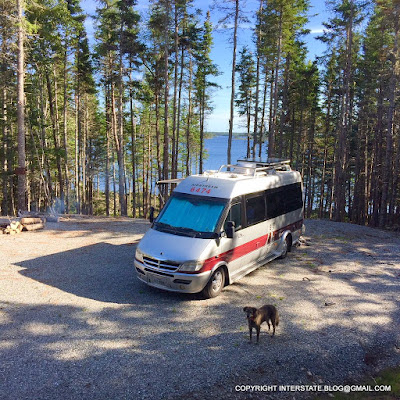 Posted by Interstate Blog at 8:00 AM