They are found in Airstreams both modern and vintage - some version of the roughly triangular overhead cabinet, its slanted or sloping rear wall courtesy of the exterior curvature of the motorhome or trailer:
Our 2007 Airstream Interstate also sports its own version of this cabinet throughout, albeit in a smaller and blockier form than some of the historical trailer renditions.
I must confess that I have been having a devil of a time keeping stuff organized in these cabinets, which constitute a large percentage of our available storage (our vehicle has seven of them).  Some of the Airstream trailers have cabinets that are large enough to accept an extra shelf in the middle despite the sloping rear wall.  This is not the case with the Interstate's cabinets, which are just too small for a shelf.  So what happens is that everything tends to end up in a heap at the bottom of the cabinet, no matter how well organized it might have been to start with.
To improve upon this mess shown above, my husband and I custom-cut and installed segments of 4-inch PVC sewer pipe to form a series of cubbies to hold and organize all that clothing:
Here is our build sequence for this project.

I must say, my initial reaction to the final result has been better than I expected it to be.  In other words, I like it even more than I thought I would!!  I can see all of my clothing at a glance, and I will no longer have to think about when I need to do laundry on the road - the empty cubbies staring back at me from the cabinet will tell the tale as to how much clean clothing remains (there will be a different area set up for dirty laundry).

Now I need to come up with additional space-maximizing ideas for the other six triangular cabinets that will hold other equipment and food.  That will be a subject for future posts.

Posted by Interstate Blog at 4:36 AM 3 comments:

In this previous post, I talked about the importance of having a highly-reflective custom-fit sun shade for the Airstream Interstate's generous windshield, especially for those of us who live in the subtropics.  But of course, as with every piece of new equipment that comes into a Class B RV, you also need somewhere convenient to stow it while it's not in use.
Our 2007 Interstate has a seam in that location where the Sprinter body meets the Airstream interior finishes (aka the aluminum goodness).
This method saves valuable closet and behind-driver's-seat space (we have a mid-bath Interstate model so there's a small but important stowage area behind that seat, and we don't want to waste that space on items that can be stored elsewhere).

Convenience note - this stowage method does consume a few inches of headroom in this location, which might be bothersome to taller Interstate owners.  I am 5'6" and I can walk beneath the hanging shade without bumping it, but my husband will have to duck a bit lower than he otherwise would.  If someone accidentally whacks the shade really hard, they are not likely to damage their noggin' but they could loosen or bend those finish screws, so it might be good to keep that in mind.

Posted by Interstate Blog at 4:46 PM No comments:

The T1N Interstates were a hybrid of Mercedes Sprinter and Airstream-applied body modifications, including the running board option that mates with the front bumper cover.  However, one feature was odd for an American-modified product - the front license plate area was apparently designed for neither European nor American plate sizes.  There are two bolts on the front of the cover that appear to be approximately the same width as German license plates, but that might just be a coincidence because the trapezoid-shaped inset area would not have accommodated their rectangular shapes (and also because those bolts are holding the bumper cover to the bumper).  The net result was a potentially awkward configuration when license plates are applied, as required by law in many American jurisdictions.
When we bought our 2007 Interstate a few months ago, we noticed that there had never been any front plate installed on it.  In some states, it is apparently legal to only have a plate on the rear of the vehicle; Texas law is convoluted and therefore a front plate is advisable (I don't think a missing plate is potentially worth getting pulled over for).

The first thing my husband did was research via the Airstream site how to get an appropriate plate bracket.  "You are not going to like it," he warned after he had located the information.
So, as is the case with so many Interstate modifications, we decided to make a plate frame ourselves, and this is what we came up with.
Here are the DIY instructions on this little gem, which was more tricky to construct than you might first imagine.

We decided on aluminum because it would be strong and would not rust (it is a bit pricey by virtue of those desirable characteristics).  My husband was able to pick up a small sheet similar to this one at Home Depot.  (Humorous aside:  Home Depot stocks various aluminum sheets, and Airstream DIYers sometimes refer to it as the BORG, which stands for Big Orange Retail Giant.)
He then cut the shape out with a small jig saw.
The result was as follows.  Note that the angle of this photograph makes the cardboard appear bigger than the cut aluminum, but they are really the same size. The cut aluminum needed to be filed down to remove very sharp edges. 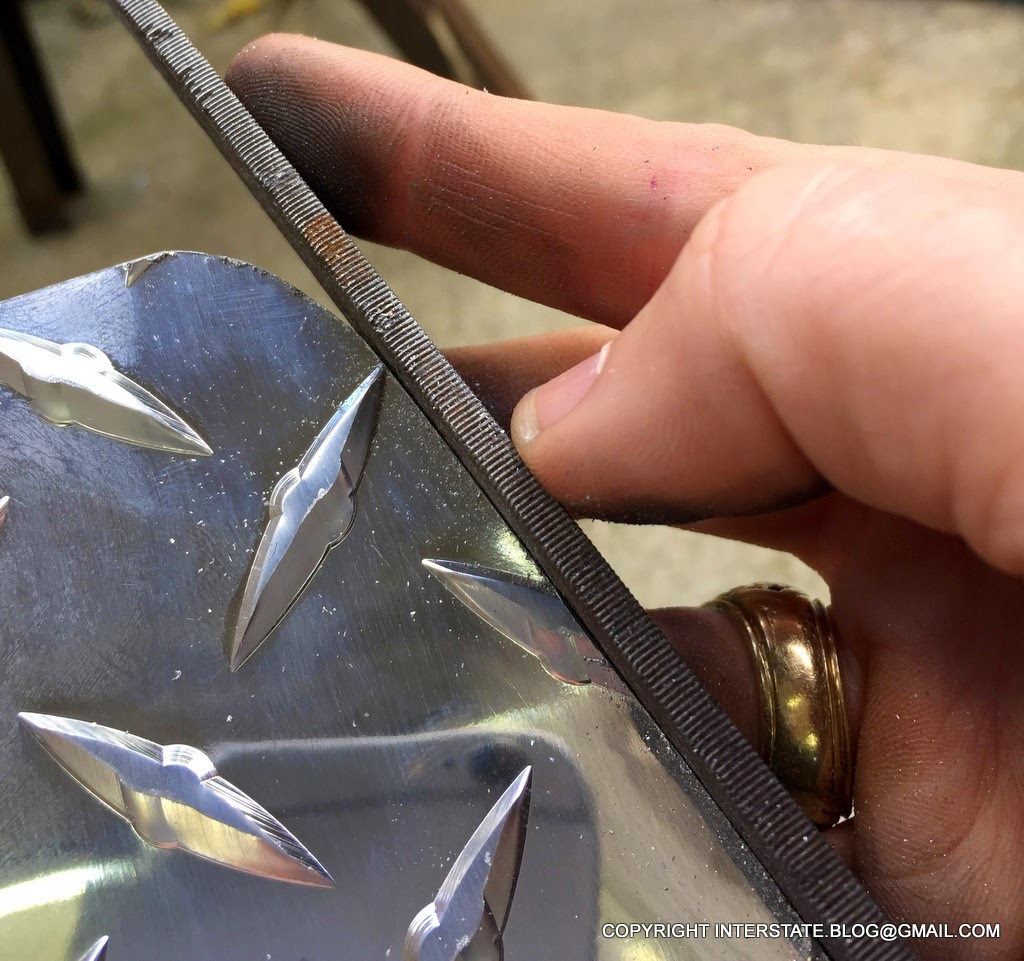 Here's where the installation gets a bit interesting.
As usual, this is a noncommercial post presenting personal opinions only.  No retailer has provided any consideration in exchange for being cited.

Posted by Interstate Blog at 7:25 AM No comments:

Email ThisBlogThis!Share to TwitterShare to FacebookShare to Pinterest
Labels: ACCESSORIES

All of the hanging utensil racks that I found on the internet were designed for houses that do not roll down the highway.  Any utensils placed on them would cause an unnecessary ruckus whacking against each other and the wall or cabinet behind them, and maybe even get bounced off entirely, if installed in an RV.
Therefore, I had to create my own silent version.
Here's the sink mat that I used.
The elastic was similar to this.
Here are the basic installation instructions:
As usual, this is a noncommercial post presenting personal opinions only.  No retailer provided any consideration in exchange for being cited.

Posted by Interstate Blog at 4:46 AM No comments: