Did you ever wish your van's awning could be turned into a bug-free outdoor room (relatively bug free, at least)?  So did I, but given the size of the project, it took me a couple of years of van ownership before I got around to making it happen.  And because of the time commitment needed for a project like this, let me first show you some commercially-available alternatives, and explain why I we could not use them with our 2007 Airstream Interstate.

Some of those commercial options are also very expensive, up to about $750.  Here's another example.
Some of the less-common alternatives were amusing.
And this gem:
Last but not least, here's an amusing targeted ad.  It showed up about two weeks after I'd done my screen searches but obviously did not purchase any of them.
We needed a very minimalist noseeum surround that would pack down into a very small package because of the limited space in our vehicle.  We couldn't afford to devote much space for it, but at the same time, we desperately needed a solution for our planned late-summer 2017 trip to Canada.  The last time we went to our target destination, the mosquitoes were so numerous at night that they would actually wake me up with their collective whining.
Hundreds (thousands?) of mosquitoes would collect on the outside of the Interstate's flap window screen, to the point where the noise became too disruptive to sleep through.  You haven't experienced mosquitoes until you've experienced Canadian mosquitoes.
Here are some general pointers on how I designed and executed a custom screen solution.  First, the materials I used.
Here is the "gist" of the two same-sized panels that I made with the intention of having them meet magnetically in the middle. 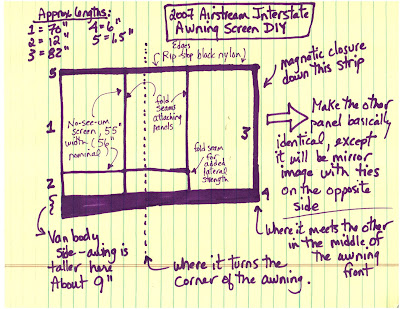 Now, you may ask, why did I settle on that design instead of some other?

Well, first and foremost, it became apparent to me that I would never be able to physically manage this screen (put it up, take it down) unless it were divided into sections.  I couldn't sew a single surround where, for instance, maybe you could squeeze into it through the side, where the screen meets the van body.  It would simply be too large.

Logically, then, if it had to be two pieces, the simplifying assumption was to make it into two identical pieces.  Less head work that way, and it would also produce visual symmetry.

So, if I were going to make two identical panels that would meet in the middle, I thought I needed something to signify that entry would be through the middle where I was adding a magnetic closure.  For that reason, and also to increase lateral strength, I added a seam near the bottom of the two side panels, but kept the center panels full-length and less visually obstructed.  It's sort of analogous to what is often done with lobby windows in skyscrapers.  There's usually a visual design feature that orients you toward where the actual door is situated in all that glass.

My construction sequence was as follows, generally speaking for each of the identical panels:

(1) I cut two 70" side panels of noseeum fabric and stitched them together down the side (see second pic down for instruction on the flat seam).
(2) I trimmed the tops with the rip stop nylon.  On the panel that must eventually attach to the center full-height panel, I left a "tail" of rip stop to be spliced into the top portion of that center panel.
(3) I stitched the bottom pieces of noseeum onto the side panels using the same approach.
(4) I cut the longer center panels (both of them) and stitched one side seam on each.  This was where the magnetic closure would go, as it is to be encased in yet another strip of rip stop on each one.

(5) I cut and spliced the center strips of rip stop, ironed them (your iron will be your best friend in a project like this), pinned them to the fabric, and inserted the first row of neodymium magnets into that strip to be sewn shut.

Here's my method of working with neodymium magnets in a sewing context.  I hold the magnets to be included inside the workpiece using magnets temporarily situated on the outside of the workpiece.  Neodymiums are so difficult to work with that I haven't found a better method.
It's important to do this magnet positioning thing accurately because otherwise the center strip will have gaps.  And gaps will let in mosquitoes.  Let me explain further.
(6) Once the center and side panels were completed respectively, I stitched them together down their common side.  At that point, I was manipulating a workpiece that was about 82" long and 165" wide, so I needed to employ a lot of clothespins and patience to get it done in a controlled manner.

(7) I repeated the general sequence above for the other half of the project - the other compound panel that consists of three widths of noseeum fabric, rip stop borders, etc.

(8)  You must periodically stop and reality-check your half-finished workpieces against your vehicle.
In that photo above, you can also see a hint of another reason why I chose to DIY this job instead of trying to buy a product off the shelf.  Notice that the noseeum fabric is bunched up next to the body of the van.  That's because the awning is not fully extended.  And why isn't it?  Look at the bottom of the noseeum fabric.  It's blowing in the wind (in fact, I tried to temporarily weigh it down for this fitting by clamping adjustable wrenches on its bottom edge).  We have noticed that the awning becomes unstable even in light winds, if it is fully extended.  But we can achieve a much more secure configuration by electing to keep it only partially extended.  Therefore, I needed a screen that would fit both scenarios - no winds at all, and light winds - and there's no commercial product on the market that would do that.
In other words, I had to customize this screen for a range of awning extension configurations, not just a single configuration.  You'll see how I did that below, and it invokes a very important tailoring principle.  If you look at old pictures of tailors servicing their clients, you never see them sewing a workpiece in a vacuum.  You always see them fitting the clothing directly onto their customers.
The same is true of camper vans.  You can make all the measurements in the world that you want, but this process works best if the customer (the van) is fit in real time, step by step.  So what I ended up doing over and over again was putting the partially-finished screen on the awning, so that I could complete it iteratively.
In that photo above, you'll notice two ties added to the seam, one above the other.  That's because the upper tie is the one that would be used if the awning were extended to full length.  That tie would then fall at the intersection of this cross-bar.  In that photo, the awning is in its somewhat-retracted position.

Now, a word on that orange paracord I'm using for the ties.
"Fitting to the customer" allowed me to verify that the center strip of neodymium magnets did, in fact, function as I designed.
This next part is difficult for me to put into words because it's a non-verbal brain thing.  Because I was fitting this for multiple awning extension lengths, there is excess fabric adjacent to the body of the van.  That has to be managed somehow.  I did that by setting it up so that the excess could be folded back over and would meet the first vertical seam in the no-see-um fabric, such that I could tie it off neatly there.
By the way, here is now I anchored this pair of screens to the body of the van.
(9) Moving on, once I began to refine the fitting in the near-to-end phases of this project, it became possible to verify the bottom trim configuration.  Here you can see one of the two mostly-completed workpieces with the deeper (next to the van body - remember, the awning is sloped) section of bottom trim placed for measuring purposes.  Remember too that, because the awning will be extended variably, this is not an exact science. There is not one single slope configuration to be fit, in other words.
Don't be surprised if errors get introduced during this massive process.  Such was the case with my effort, where the two panels ended up not being exactly the same lengths, which was important because of the magnetic center closure.  They had to be consistent.  So this predicament caused me to empty half my great room of furniture so that I could lay them out together, one on top of the other for comparison purposes, and make final adjustments to the bottom edge. 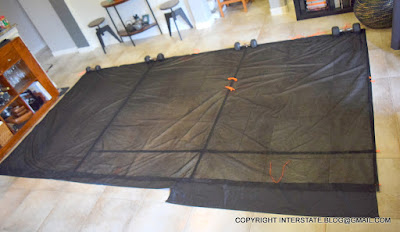 And finally, the long-awaited money shot:
Just as importantly, here's what that money shot packs down into:
A few words of wisdom for anyone who might be dumb enough, er, ambitious enough, to take on this type of massive project.


In my next post, I'll talk about making a couple of accessories for this screen, including a "skirt" to go around the van's ground effects to stop mosquitoes from entering the enclosure by that route - from underneath the van.  In the mean time, happy #vansizedsewing!!

Posted by Interstate Blog at 5:52 PM No comments: