OK, I’m going to describe the facts of our fraud experience as succinctly as I can, in a timeline format (all dates 2019).

TL;DR – Incredibly strong circumstantial evidence suggests that my husband got frauded during the purchase of an AT&T Mobley device which is currently being offered at a promotional price.  AT&T has voided over $2,000 in scam charges to his account, but we don’t know how much of my husband’s personal information has been compromised in this process.  I advise Mobley owners to watch their own AT&T accounts carefully for evidence of this type of fraud.  It’s not the Mobley device itself that is the locus of this scam – the scammers are apparently adding unauthorized additional lines to AT&T accounts at the same time as they are adding the legitimate Mobley lines.  And then they rack up extreme charges on those additional lines very quickly, knowing that they are going to be detected and shut down soon enough.  We have no idea how widespread this fraud is.

(1) On Thursday January 31, my husband went through the contractual process of ordering a Mobley for inclusion on his AT&T cellular account.  This is a popular cellular internet device used by vehicle owners.  You can read about the deal on this Sprinter Forum post, for example (and there are many others).

(2) Our Mobley device was shipped on Tuesday February 5.

(4) Due to our work schedules, we could not activate our new Mobley right away.  We set it aside to deal with it on the coming weekend.

(5) On the morning of Friday February 8 (i.e., today), my husband received two text messages from AT&T (from the real AT&T - not from a scammer) telling him that he owed in excess of $1,000 in international roaming charges on each of two cellular lines on his account.  The numbers of those two lines were 409-204-9284 and 409-204-9285.  Note that they are almost sequential to the number that was legitimately issued in conjunction with our Mobley. 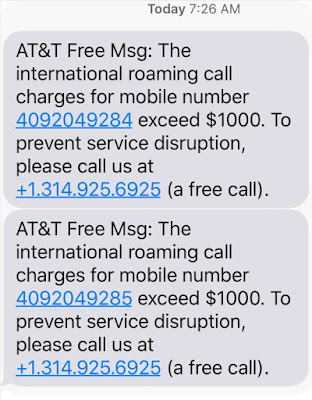 (6) Upon contacting AT&T, my husband was told that “someone” working “online” had fraudulently added these additional two lines to his account on February 4, the day before our Mobley shipped (and I bet this unauthorized addition occurred at the exact same time that our Mobley hardware device was configured).  AT&T voided those other two lines with the excessive charges, placing the SIM numbers on a global blacklist.

(7) AT&T revealed no further details about this fraud.

(8) My husband now has to monitor his credit rating etc. to ensure that no further breaches occur going forward.  It’s not clear how much of his personal data the Mobley sellers have accessed at this point.  Clearly, they got hold of enough information to transact thousands of dollars of scam in his name before they were shut down.

I love this meme below - good question! 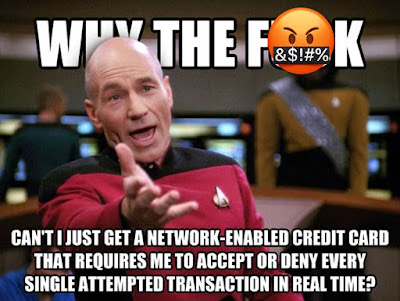 EDIT 20190211 - AT&T told my husband on Feb 8, 2019 that the fraud was resolved.  But when he logged in and re-checked on Feb 10, the charges were still there.  Worse, they would have autodrafted in another 3 days if he hadn't stopped that from happening.

No more autodraft!!  It's too dangerous, obviously!  If the autodraft of these frauded charges had gone through, our mortgage payment might have bounded, and then it would have been goodbye credit score. 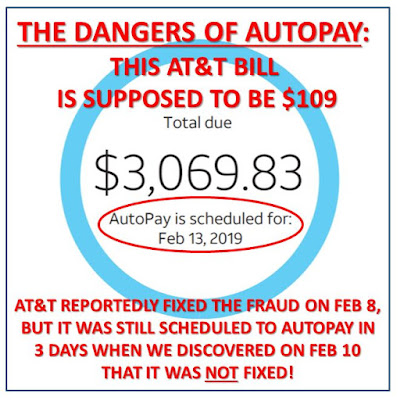 EDIT:  I'm just going to leave this update here.  This says it all. 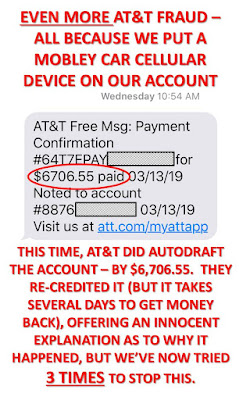 Posted by Interstate Blog at 10:11 AM No comments: