PLUMBING AN EXTERNAL PROPANE TANK FOR AN AIRSTREAM INTERSTATE

For a number of years, I thought it was not feasible to connect external propane sources to our 2007 Airstream Interstate Class B camper van.  Several years ago, we dissected this issue in a lengthy and detailed Air Forums thread titled "Carrying extra propane--2006 T1N Interstate Parkway" (the Parkway was a contemporaneous short-lived model produced at the same time as first-gen Interstates).  At that time, we concluded that we just didn't have the clearance required to plumb the correct fitting on our tightly-configured vans.

But of course, back in 2016 when that thread was hatched, we were still thinking inside the box, weren't we?  It took a full-blown humanitarian crisis and emergency in which one-quarter of the Texas population found itself without electricity and without water service in many cases in sub-zero weather, and approx. 1.3 million people in greater Houston alone were left without basic utilities, as a polar vortex crippled the Texas power grid,... it took ALL THAT to push us outside of our original box.

And by "us", I really mean my husband, who invented this approach I describe below.  Rather than trying to install a fitting AFTER the freakin' OEM propane regulator, as we had originally aspired to do, he figured out that we could tap into the T-fitting that we abandoned when we removed the original Dometic propane fridge and installed a compressor-driven Vitrifrigo instead (see this other post).

The sequence goes as shown in the scribble images below.  I have referenced the corresponding part numbers as those parts were found at Lowes hardware store in February 2021.  Note that there are probably more elegant ways to plumb this thing, but in our electrical grid failure emergency, a lot of supplies were sold out, especially items relating to alternate energy that people were trying desperately to cobble together at the scale of their households.

As I said, there are probably more elegant ways to achieve this, but this seems to work.  For safety, I will be leaving that yellow valve shown in (1) closed except when we need to be operating off an external propane bottle.  That means crawling directly under the center of the van to close that valve, but I'm used to that.
And the reason why we worked to finally get this achieved, after all these years of van ownership?
Because we have an upright freezer filled with hundreds of dollars of home-made organic meals.  If we don't find a way to save that during the rolling black-outs that we were told were going to be 15 - 45 minutes each but which actually lasted, OH, ABOUT 52 HOURS!! the first time, it would really represent a loss because it's not just the cost of ingredients - it's hours and hours of our time to prepare and freeze all that stuff for future travels.  So now we have the option of running an extension cord from our Interstate to our house, and powering our freezer off our Interstate's propane generator.  We couldn't do that previously because the onboard propane supply is insufficient to meet that kind of load (the onboard tank is very small).  We needed an external source, with propane bottles we could swap in and out at will.
Here's music to my ears in this demonstration:
POSTSCRIPT:  This post focuses on a project that we frantically undertook in an effort to save some of our food.  It doesn't say much about the plight of our 30 million fellow Texans.  Here's an image reflecting some of the extent of that, a small ode to a population that has suffered immensely this week: 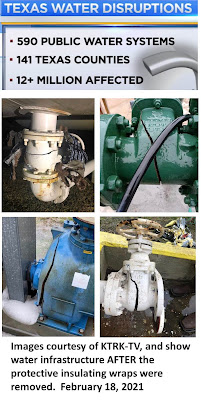 Posted by Interstate Blog at 3:36 PM No comments: