FIXING A WINDSHIELD CORNER LEAK IN A T1N SPRINTER

Normally I title my maintenance- and repair-related blog posts, "BLAH BLAH BLAH IN AN AIRSTREAM INTERSTATE" but this issue is all on Mercedes Benz, with nothing to do with Airstream's Class B conversion.

The T1N Sprinter van series was designed with an unfortunate configuration along its upper windshield seam.
From a materials science perspective, those upper corners could scarcely have been fashioned into a more vulnerable configuration.  Not only are they highly stressed at the molecular level to begin with by virtue of their shape, they have to receive a deluge of drainage coming at them with a certain degree of force.  It's a one-two punch that eventually might lead to the likes of this:
One of those corners looks worse than the other.  Let's see it in close-up.
It's just a tiny area on a very large van, which may make you wonder, "How did she even notice it?"

May I offer the obvious answer:  Water penetration.  Actually, only the driver's side degradation had worked its way all the way through to form a pin-hole leak.  The passenger side looked bad but was still water tight.

I always wash and wax our Sprinter and I always encourage other people to learn to do the same.  Every time someone on a forum gloats about having gotten a cheap and convenient truck wash, I wonder, "Yeah, but what incipient maintenance conditions might you have missed because you yourself were not examining your vehicle during that process?"  This case in point is a typical answer.  There is always something demanding attention with a large, complex machine.

And some of those things can get serious quickly if they aren't caught early.  In our case, we are triply motivated to not let any condition like this get out of hand.
Fortunately, I spent much of the weekend working on some cellular improvements in the van, and so I had dismantled the Airstream trim-out and removed the headliner on the same day as I happened to hand-wash it.  For that reason, everything was exposed and I spotted the pinhole leak immediately, a condition that otherwise might have gone unnoticed for quite some time.  What did I say above?  Doing your own work is a good thing.

Do you see the white twisty wire in the foreground of the photo above?  That actually belongs to this device.
So, OK, that's my future leak alarm system for this vulnerable location, but what about fixing the leak itself?  That process went like this.
This is the product I used, which might not be ideal. 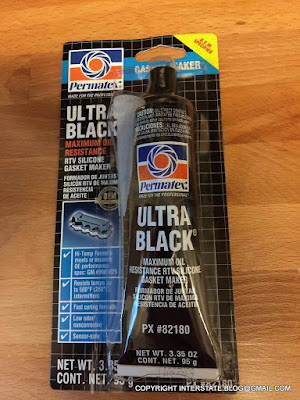 This Sprinter Forum thread is not necessarily fond of using any silicone-like product around the windshield perimeter, but (a) I wasn't sure what else to use that I could obtain in sufficiently small quantities on short notice, and (b) I was only doing a couple of linear inches, so we'll just pay extra attention to prepping those corners in the future if we ever have to do a wholesale windshield replacement (there's some suggestion that a silicone product might interfere with a future sealant application during windshield replacement).

So there you have it, another chunk of a Sunday afternoon devoted to rig maintenance.

EDIT 20170321:  See also this Sprinter Forum thread on this issue for further discussion.

This was the first of three rather odd alignments on March 16, 2017:
I had already been planning to scout around Port Bolivar today for good boondocking locations.  I took the email blast as A Sign and decided to try out the Flats as a first measure.

But first I had to get across the channel.
That oceangoing vessel in the background cutting our path represented one of the other two weird alignments today, but I'll save that for the end of the post.  The grand finale of sorts.

This was actually my first ever on-the-beach camping.  Numerous times we've overnighted adjacent to the beach, at a private residence or public park, but I had never boondocked (notice how I linked that term - that's an odd alignment clue) right on the public beach until this trip.  As well as being DA BEACH!!, I figured it would be a good performance test for our solar-lithium system.  What better abuse for an electrical system than roaring high winds and salt spray??  Seriously, when I went to boil water for my tea, I had to close the Fantastic because the air flow was so strong that it blew out the burner on the SMEV.

Beach blogposts are so easy to do, because I don't see fit to photoprocess anything.  The colors and shadows change dramatically with each passing cloud and change in sun angle, so why alter the natural results by shifting color and lighting parameters?  Here's some show-and-tell, in the raw.
One of the warnings on Campendium is to watch the weather and tides at this location.  In an area as impossibly flat as the upper Texas coast, even minor storms can raise the high tide level significantly.

The public access area gives way to an area that has been partially restricted for nesting birds.  The sign is pretty funny.
Wouldn't you know it, I had decided not to take my DSLR and only had my cell phone for all these pics.  One could do some really interesting photography out here with a good camera.
Although the density of beachgoers was unexpectedly low, I did see a couple of weird things.
Probably unrelatedly, a military chopper did a low pass with a full complement of missles hanging from its undercarriage.  But I'm not far off the Houston Ship Channel and Texas City Ship Channel and Galveston Ship Channel with all of their special security zones and needs, so that in itself is not that unusual.

It wouldn't be one of my overnighter blog posts without at least one obligatory back-door view shot.  Or in this case two, because the lighting conditions changed so dramatically and delightfully.
I typically check Instagram prior to turning in for the night, and thus came the day's second odd alignment.
As is often the case, I slept unusually well in the Interstate, and awoke to this sight.
I wasn't the only one who was happy to greet the new day.
The moment of truth.
And speaking of that solar system, what about that third odd alignment?  I said it had to do with the oceangoing vessel that had cut our ferry's path the day before, as I was en route to the Flats to further test our Interstate's solar and lithium battery system.  Look closely at this pic - can you see it? 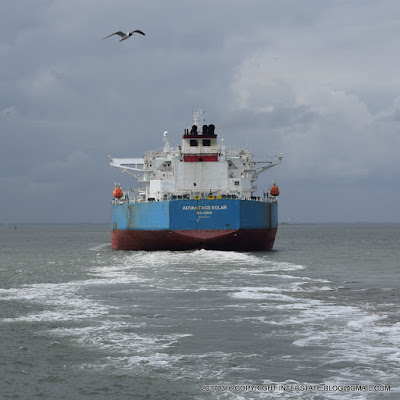 Maybe not, because you're reading this on a tiny little cell phone, aren't you?  So let me zoom in for you. 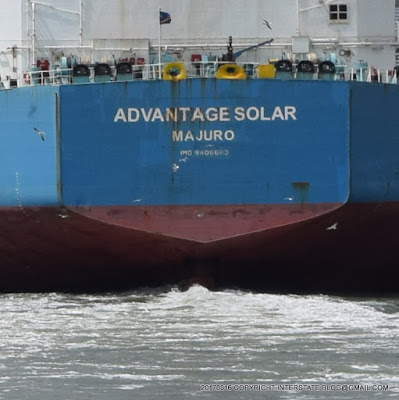 Advantage solar - no doubt about it.  To boldly go where no solar-lithium van has gone before!  But what are the odds on that name??

Posted by Interstate Blog at 6:37 AM 2 comments:

I'll know it when I see it.  That was the mantra that I adopted more than two years ago when I began searching for a portable grill that we could take with us in our 2007 Airstream Interstate.
We had two considerations that most RVers do not have to weigh when choosing a grill.  Number one, there are no external storage spaces in almost all Mercedes Sprinter-based Class B motorhomes.  And who wants to carry a stinky greasy grill inside a very small living space?
Number two, a big portion of our outdoor cooking is done under conditions that more closely resemble this scene below than a campground with decrepit amenities.
Because one of our primary travel destinations involves this piece of waterfrontage that we have, which comes complete with an infinite supply of firewood, we don't always need a grill per se.  We just need to cook food the old fashioned way, over the open fire.
So for those reasons, my grill criteria were as follows:


The UCO Flatpack Portable Grill and Firepit spoke up and said to me, "Three out of four ain't bad, especially given that you can create the fourth yourself."  Here's a 3-minute video by James of TheFitRV explaining this product, and it will reveal what I mean by the fourth.

The part that is missing from the product as sold is a robust storage case.  The internet positively howls with despair that UCO's Flatpack Mini grill version comes with a storage case, but the regular-sized product does not (but for $33.73, which was the Amazon Prime price that I paid, I wouldn't necessarily expect a case to be included).

In the series of pics below, I show how I was able to create a durable and semi-waterproof case in about an hour's time.
And voila.  A secure case is thusly made.  Word to the wise:  Always make your cases a bit larger than you think they need to be, just in case you get a post-project idea that you want to add something else in there.  In this case, I decided that I wanted a dedicated set of BBQ tongs to live in there as well.  Fortunately, I had left sufficient room in the design.
Now, you don't have to use plastic tarp for this project, but bear in mind that the grill is made primarily of sheet metal and has a few sharp corners.  Whatever you use in the way of material should be resistant to snags and tears.

OK, so there's the product and there's the the four-out-of-four home-made case that now goes with it, but how does this grill actually function?  How well does it cook?
I cook with charcoal on average about once per year (until now), so I'm not very good at it.  I often don't have the patience, and thus my inaugural meal was acceptable but I didn't knock it out of the park.
I was too liberal with my use of wood chips during this endeavor, and I had some flare-ups that char-broiled my meal a bit too intensely, as you can see in this photo below.  But that fault was mine, not the UCO's.  It functioned very well.

Do you ever use charcoal only to realize that they only get to their optimal burning condition after you've already completed everything you needed to cook that day?
In closing, the UCO Flat Pack Grill is a great product, and I have only two procedural recommendations over and above what the manufacturer seems to recommend:

20170327:  Well, here's the first update, but it's not about protecting the bottom of the grill.  It's about storing them - both of them, the original Flat Pack, and I later purchased the Grilliput as well.  The Flat Pack is most suited to campground cooking, while the Grilliput is best for wild-land and less-regulated areas where open fire cooking is permissible.

We have a small inset area beneath our Class B's couch.  It contains a panel that must be removed in order to access water valves during winterization (which we have never done, given our geographic location).  I removed two screws, pierced strips of Velcro with a small scratch awl, put the screws through the Velcro, and re-installed.  Now I have a convenient lashing point for the grill case, with no cabinet modifications required. 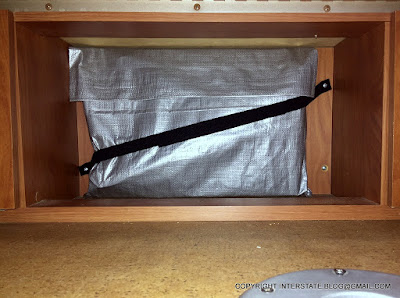