In the first part of this post series, I talked about our rationale for DIYing a larger-capacity solar system in our 2007 Airstream Interstate T1N Mercedes Sprinter-based Class B RV.

In this post I will describe the principal external components and the general approach to this job.  I'm not going to include precise measurements or detailed instructions because (1) installation principles have already been described by others, especially the solar equipment vendors, and (2) we may be the only T1N Interstate owners on the planet who choose this particular solar array and installation strategy, and therefore it's not worth it for me to over-do the details.  There are easier ways to do this type of project, and there certainly are cheaper ways.  If any reader does decide they want more information on this exact installation, please contact me via interstate.blog -at- gmail and we will chat.

So here goes my attempt at giving a general orientation and a "feel" for the project.
For the panels themselves, we chose a Grape Solar model called GS-S-100-TS.
Here is what one of the 3 panels looks like when "dry fit" framelessly in the intended space:
We bought 3 of these panels and other components to be described from a small company called AM Solar.
We decided to run the wiring for the panels down through the propane refrigerator vent.  AM Solar sells what is called a Refrigerator Vent C-Box (with the "C" standing for "combiner") for exactly this type of retrofit.
My husband bought this type of wiring from Lowes, but recommends to other DIYers that it would be better to get a similarly spec'd wire with a larger number of thinner strands.  The wire he bought was available locally but was stiff and challenging to work with.
Here's where things get more interesting and non-standard.  Because we were mounting these 3 panels on the OEM roof rack, we could not use conventional hardware such as what is shown in this photo which I screengrabbed from this Roadtreking blog entry.
Of course, that particular Class B poster had no roof air conditioner to contend with, a scenario that would make any Houstonian faint dead away with shock.
We decided to build a frame out of a versatile extruded aluminum product called 80/20, which tag-lines itself as "the industrial erector set".  The next series of pics shows how those components go together.
In my next post, I'll talk about how the clamps and risers are attached to the OEM roof rack.  That post may be a bit more time in coming, because we still have to weld receivers for the risers onto the cylindrical clamps that attach to the roof rack.
Posted by Interstate Blog at 8:00 AM No comments:

Our 2007 Airstream Interstate Class B T1N Sprinter-based RV was born without a solar energy installation for recharging our house battery (newer models have multiple batteries but our original configuration only had one Lifeline).  After a year of ownership and about a dozen in-state overnight trips, with our forays being limited by our family responsibilities and employment schedules, we decided that we wanted to go ahead and DIY a solar system.  We knew it would be a big job that would take some time, but our long-range plan is for more elaborate off-grid trips, and we want to be ready when that time comes.
As far as we know, our plans in this regard were unprecedented.  Neither my husband nor I had seen an existing example of a T1N Interstate with a retrofitted solar system, either in the resale market or on Air Forums.  With the amount of work and expense associated with this job, we did extensive research on what would be the best way to accomplish our goals.  Here are a few sources from which we gleaned our concept-level information.
One theme that persisted across many different accounts was the need to over-design the solar system.  In theory, you calculate X amount of demand and so you install X amount of solar capacity and you're done.  In practice, you calculate X amount of demand and then proceed to install perhaps as much as 2X or 3X capacity in order to be responsive to systemic inefficiencies, unforeseen circumstances, unavoidable parasitic draws, and other logistical limitations. 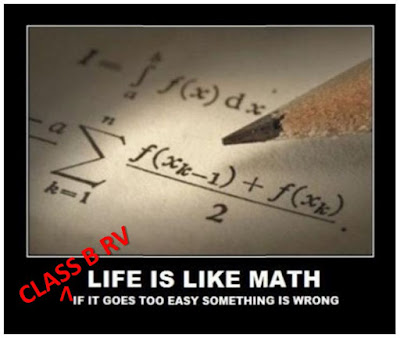 Given my desire to use our Interstate as a mobile personal workstation, my future electricity demands could be higher than those of the average vacationer.  For that reason, one of the first big questions that we had to address was where to put multiple solar panels on the roof of our T1N Sprinter-based Interstate.  The available space is small and there were already multiple pieces of equipment installed up there, including a Dometic air conditioner, a Fantastic roof vent along with its cover, propane fridge vent, digital OTA TV antenna, cab radio antenna, back-up video camera, extra brake lights... all that on the roof of a 22-foot camper van.  And remember Handy Bob's number one solar lesson - nothing can cast a shadow on the panels because any interference whatsoever will cause the systemic efficiency to plummet.
I took my solar installation inspiration from this startling T1N Interstate photo that appeared in the resale market in mid-2015.
The genius in that kayak mounting example was that the owner(s) installed a second roof rack on top of the existing OEM roof rack, thus making that section of the roof do double-duty in supporting both the air conditioning unit and the cargo vaulted above it.   And if they could successfully do this with big bulky kayaks, surely we could do it with solar panels.  Right?
Such an expensive piece of hardware ought to serve a purpose other than merely decorative, which may have been Airstream's intent given the corresponding physical limitations described in the photo caption above.  In my next series of posts, I'll talk about the strategies for maximizing the utility of this device, and the installation of our solar system components.
Posted by Interstate Blog at 8:55 AM No comments:

A business trip took me to the La Grange, Texas area, where I was able to squeeze in a trip to see the Kreische Brewery and Monument Hill State Historic Sites.  Here are some photos of this unique destination, both the brewery and the historical city.
Following this visit, I proceeded to the Colorado Landing RV Park, on the banks of the Colorado River about one mile from Monument Hill.
This RV park was very orderly and well-run, but it suffers from the same limitation I have found in other analogous riverine locations such as Pecan Park in San Marcos, which is on the San Marcos River - road noise.  Colorado Landing is located a short distance from the huge U.S. Route 77 bridge over the Colorado River.  The unimpeded drone of 18 wheelers flying over that thing was tedious, not consistent with the peace and quiet I would hope to find while sitting next to an undeveloped section of a major Texas river.  It appears that this kind of limitation is simply the trade-off one has to accept for urban proximity and full hook-ups.

Due to my professional schedule, I didn't have time to see La Grange proper, but I will leave you with a few pics of its most curious feature.
I saw one and I thought, "That's unusual!".  Little did I know, it was not an isolated phenomenon.
I'm sure there's a story behind this, but it's not readily available on the internet.  Perhaps I will discover it on my next trip to this area.

Posted by Interstate Blog at 6:47 AM No comments:

My husband had forbidden my idea of drilling holes into the cabinetry of our Class B RV Airstream Interstate so that I could install one of those large flip-down cup holders.  Fortunately, his objection forced me to come up with a more versatile and creative option for holding my beloved YETI 30 ounce Rambler.
You might wonder why on earth I would form an association between these two entirely-unrelated consumer products.  The answer is simple:  Because Yeti is asleep at the wheel and so is the aftermarket, to the point where both Yeti-branded and knock-off accessories are nonexistent at this time.  I had been searching for a 30-ounce tumbler carrying means for months, and it was only by chance that this Lightning Deal appeared on my computer screen and I was able to see the resemblance between the two products.

It's not as trivial an issue as you might think.  Like an increasing number of Texans who live in scorching hot weather for most of the year, I rarely leave my house without this Texas-designed Yeti tumbler in tow.  But I'm always fumbling with it, wishing I had an extra hand, or wishing I could stash it somewhere convenient.
Here's the beauty of this adaptation versus a conventional flip-down jumbo cup holder which would have to remain fixed in one place.
Anyway, if you want this two Ogres Essential-Z chalk bag, you might want to order it soon.  When word gets around of this unexpected use, I think they'll fly off the shelves just as fast as the Yetis themselves (according to repeated reports on social media, there are times when Yeti tumblers become impossible to buy in greater Houston due to supply bottlenecks).
Posted by Interstate Blog at 9:05 AM No comments:

Last week, I managed to squeeze in a day and a half of outdoor experience in Angelina National Forest, where I boondocked in the Boykin Springs area.

In recent years, the federal government has fundamentally changed the way that it manages these types of relatively remote sites.
Part of this rec area was a Civilian Conservation Corps project, which certainly gives it a unique style.
Getting into Boykin Springs was interesting, as it entailed my first low-water crossing in the Interstate.
"You must be a pretty good driver," the workamper host noted after I inserted my Airstream Interstate into this little space among the trees. 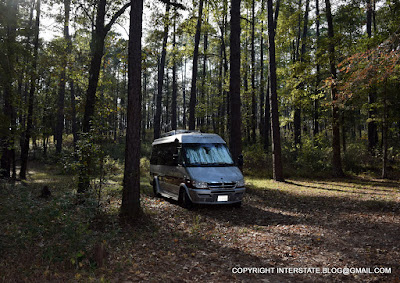 This is what it's all about:
After getting settled in my spot and grabbing a bite to eat, I set off on the 5-mile round-trip hike to the old Aldridge Sawmill historic site.  Here are some pretty pics I took along the way.

I'm not going to post any additional pics of the Aldridge ruins because that would be too much of a spoiler.
I had dearly hoped to sleep with the rear door open, but temperatures fell into the 50's and I'm not as physically robust as I was when I began back-country camping over 30 years ago.  I left the door open most of the evening so that I could listen to the critters, but then shut it for sleep so that I could retain some heat in the vehicle.  Our model of Interstate has flap windows directly above the couches, however, such that when the couches are folded down to make the bed, one's ear is still right next to an open window, which approximates the tent-like feel that I want.

All in all, a wonderful trip, probably my favorite thus far, due to the remoteness and solitude I was able to experience.
Posted by Interstate Blog at 6:35 AM No comments: