I don't think I mentioned this in Part 1, but when I ordered that Lagun table from Merry Ol' England, I bought an extra receiver.  Today with some help from DH, the second mount got installed in the rear of our Airstream Interstate.  I've covered some of these installation ideas in Part 1, so this post is mainly a photo tour.

There is one place in the rear of our van, a cabinetry bulkhead, that was fit to receive this second mount.  It looked like this:
As with the front mount, the under-blocking had to be as non-hooking as possible (no busted shins on sharp corners), and it had to conform to the available space, which in this case was narrower than what had been available at the front.  Therefore, rather than cutting a standard 45 degree angle on the block, I had to compute the angle instead.
You can see that there's a structural cross-member spanning the space (the little shelf with the most dog hair on it).  That means that my rear blocking plate had to be cut in half for this one, vs. a solid plate in the front of the van.  Plus we decided to install a sheet metal top plate to strengthen the area further.  As usual, all my prototypes were first cut out of cardboard.


I didn't take pics of how I fashioned the block, because that process was much the same as in Part 1.  Attaching the block was simple - we clamped it on, and drilled holes all the way through.
Getting those plates on the rear side of the bulkhead was not as tough as you might think.
Guess what this means??  I get to delete both the receiving cups and the old table legs from the van inventory.  Removing the receiving cups from the underside of the table made it considerably lighter, which is very helpful given that we are hanging it for storage on the outside of the wet bath door.  It also gives it a cleaner look.

Now you have to endure a bunch of money shots showing the range of motion with the table in this location. 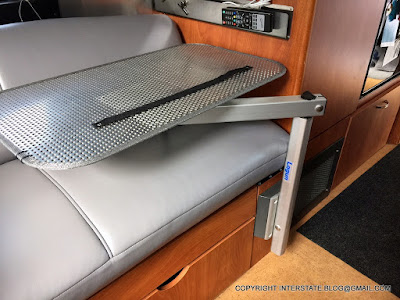 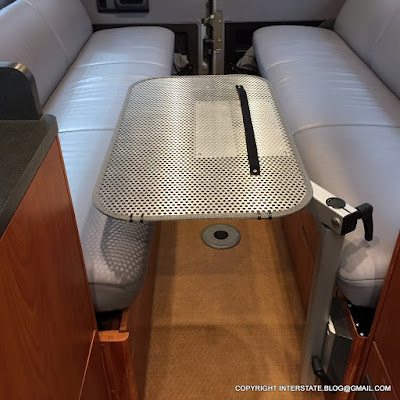 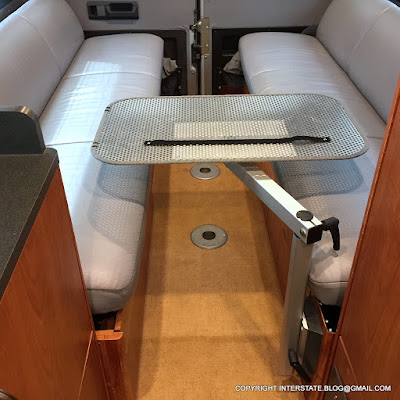 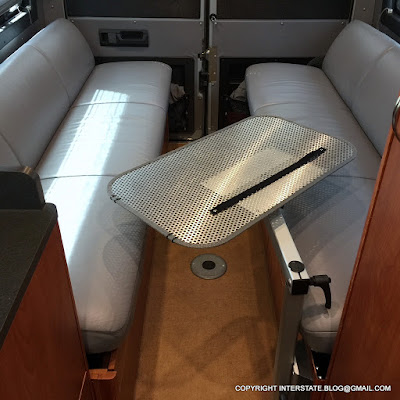 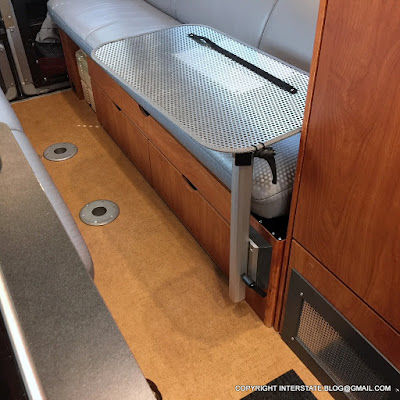 It's really convenient to have a one-piece table that swivels completely out of the aisle when needed.  Initially I wasn't sure if I was going to use that second receiver, but I'm glad I ordered it.


20180926 EDIT:  Pic of the new rear mount in action.  I enjoyed it immensely during my recent 5-week trip through the United States and Canada.  I got a lot of important work done on it. 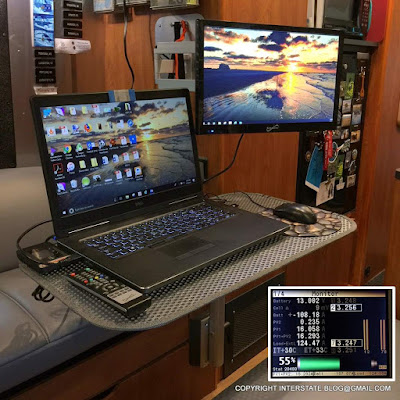 This post follows on Part 1 where I described the creation of a window covering for the Airstream Interstate's sliding door.  That was a different project because that covering basically hangs by Velcro tabs on the outside of the window frame.  This covering was made for what I call the "Airstream signature" window - the un-openable galley window that Airstream installed to maintain stylistic conformance with its historic product line.
That window has an inset frame with a wide rubber gasket on the inside.  The visually-cleanest way to make a thermal covering for that window is to inset it.  And the easiest way to inset it is to give it some stiffness so that it will stay in place largely without assistance.

I decided to try building on the existing Reflectix covering that I made for that window.  It already serves as a template.
The obvious question is, how does one sew Reflectix?  Generally I find that anything I can cram beneath the foot of my sewing machine, I can sew.
It's quite comical sewing Reflectix.  It goes pop-pop-pop-pop just like you are popping regular bubble wrap.
It has been my intention all along to maintain a metallic fabric covering on the surface of these window coverings for conformance with Airstream's aluminum interior wall coverings, but I haven't yet found a metallic fabric that I like.  This is a different one which I am hoping will prove to be less fragile than the stock I used in Part 1.
You can see that I basically just top-stitched this fabric in place.  I like to have double rows of stitching on these window coverings coverings whether they hang or inset.  It seems to give a good finished look and some body to the outer edges.

Money shots:
Here's the part that perhaps appealed to me the most:
It now looks like I have an actual professional automotive product on the wall instead of a cut sheet of Reflectix insulation.
So there's another prototype executed, and I'll report back on how it performs, insulation-wise.

Posted by Interstate Blog at 5:29 AM No comments: