REPLACING THE FRIDGE IN AN AIRSTREAM INTERSTATE **AGAIN**!

Starting in March of 2015, we tried to troubleshoot our Airstream Interstate's original Dometic 2351 3-way absorption refrigerator, and you can read about those misadventures here.

Upon conceding failure with that troubleshooting, we replaced that Dometic 2351 with a new Dometic 2351 and you can read about those additional adventures here.

Twenty months after we installed the new Dometic 2351, it again went on the fritz.
Somebody shoot me.  I'd like to say that I can't believe we wasted our money on a second fridge of the same type, but unfortunately I have to believe that.  Back when we made that decision, we had only one Lifeline battery - not the lithium set-up we have right now, which gives us approximately five times the usable power compared to our OEM set-up.  So back then, we had no choice but to buy another 3-way absorption refrigerator and obviously we did not choose well.

Why did our second Dometic fail?  An ominous quote from the Diagnostic Service Manual reads, “A refer (sic) that chases the out-side (sic) temperature is improperly vented or has a weak cooling unit.” (page 24).  We were seeing the temperature chase ambient, but we knew that there was nothing wrong with our venting.  So how could the cooling unit have suddenly become "weak"?  There are various speculations on the internet, including an intriguing possibility expressed in this forum thread, which is that one of the gas components, namely hydrogen, leaks out preferentially from the welds in the cooling unit, given that it's THE smallest molecule in existence.
Once hydrogen escapes, the unit doesn't perform as well, and there you have it.  "Weak".  Or so the theory says.

To make a long story short, I researched the available replacement possibilities in the realm of two-way rather than three-way fridges.  A well-known RV upfitter had recommended that I consider either the marine fridges of brand name Vitrifrigo or Isotherm, so those are the ones I stuck to.  Rumor has it that Norcold is experiencing major failure rates right now (one source claiming 80% returns!!!  Plus they had major recalls even before these latest reported problems, so I did not even consider that brand.)
As you can surmise from the chart above, Vitrifrigo would have sold me on the size of the freezer alone, but it was also well-regarded by wholesalers in my location, which contains one of the largest boating communities in the world.

I had a lot of trouble verifying the specs of these fridges, though.  Dimensional information on the internet was limited and often contradictory.  Customer service was no help.  Vitrifrigo itself is an Italian company which appears to have very poor representation here in America.  No retailer carried either of the models I was evaluating, so I could not view them in a brick-and-mortar to confirm that internet thumbnails were showing the actual product I was looking for.
Fortunately I found a really good wholesaler who was willing to crack open one of his shipping boxes so that I could examine the Vitrifrigo C115IDB4-F in person, in his warehouse.
That model link I gave above is to a UK site because I can't find a decent American sales listing as I'm writing this... case in point regarding the difficulty of finding information.
Having been satisfied with what I saw in the warehouse, I phoned one of my favorite marine parts retailers and had them issue a purchase order to the wholesaler.  Then I happily carried this baby out of the wholesaler's establishment, stopping in at the retailer to sign my credit card receipt on the way home.
Here's how this Vitrifrigo compares to our useless Dometic 2351.
The Vitrifrigo's cut-out size, and especially it's face mount, was larger than the Dometic, which required us to do cabinet surgery.  Everyone's cabinetry will likely be somewhat different, so I won't run through this procedure step-by-step.  I'll just show some general provisions to give you an idea how we accomplished this.  In our case, it proved to be quite time-consuming.

I'll talk about adjusting the width first, then the cabinet height.  But because this became an iterative process for us, with a couple of mid-project do-overs, some of the photos below do not show full continuity.
We needed to expand the width of the opening to about 23 inches (including frame overlap) to accommodate the Vitrifrigo (the inset number was smaller than this).
Here you can see how that right side was constructed:
Here below you can see the right side with that entire strip removed.
As I started to say above, I tore off the sheet metal liner on the front portion of this space because its caulk job was irregular and un-salvageable.  But that left the original raw plywood exposed, so I sealed it by adding three coats of oil-based enamel, the same enamel paint that I'd used on the lithium chamber ventilation screen that you can see at photo left above.  Even if nothing in the fridge leaks or spills per se, drips of condensation can still make their way out the door and down onto its support platform.  That's what had caused the discoloration that was evident on the raw plywood.  The original metal sheeting here was not installed in a waterproof manner.

Or, even if drips don't occur, wood should never be left raw in a camper van, especially in our subtropical climate.  That's just asking for trouble.
By the way, before I forget, here are the details on the gray paint I used throughout this project.

We originally thought that we could salvage some of the original face trim, but that proved not to be the case because Airstream's OEM DC wire bundle plus the solar wiring were interfering with the refrigerator on the rear left side.  Therefore we had to remove all the original face trim, and basically start over, in the most minimalist way achievable.
You'll notice the left down-rod has a gap between itself and the left wall of the cabinet.  My Class B mantra:  Not a single inch wasted.
That space is pure gold - a precious 0.7 cubic feet, albeit in a really strange planar configuration.  But not strange for a Rumpl blanket.  I cut a "spine" for it out of coroplast (plastic cardboard) and used two of my big prepper elastics to cinch the Rumpl to the coroplast, to give it shape and stiffness so that I could slide it in there.  Not only does this create blanket storage (ALWAYS a problem in any Class B), it also increases the effective insulation for the fridge.  Obviously this view above is with the fridge not yet in place.
OK, so, achieving the correct new width was the relatively easy part.  Adjusting the cabinet height was a female dog.


James of The Fit RV gloats every time a van project demands that he purchase a new woodworking tool.  So does my husband.


I'm trying not to complain, but I'm not always succeeding these days.  Let me say it again.  It was miserably hot from start to finish with this job.
The fully-excavated shelf area looks like this, and you can see the complexity of the woodwork.

As a rule, I never leave any raw wood edge exposed in the Interstate.  It's just asking for trouble.  One spill of liquid or leak of water, and you've got swollen plywood and ruined cabinetry.
There's no need to run that risk.  Seal the exposed edges of your plywood - at least it will buy you some time if you have a spill incident.  Look for unsealed edges when and where you can.  In our rig, Airstream generally did not do this edge-sealing.
As it turns out, the resulting narrowed gap above the microwave was no longer tall enough to store my cutting board because I cannot get my fingers in there.  But it did turn out to be perfect for this item which has long eluded effective and protective storage:
Every inch of storage counts in a camper van.  Every single opportunity for storage must be leveraged. Finding a half-inch space to store an atlas is golden.

Just before we loaded in the fridge, we covered its rear refrigerant line with the same plastic wire conduit we'd used for the interior DC wire bundle.  All that refrigerant line had for protection was the usual layer of spongy foam which, in this tight environment, didn't seem sufficient (as evidenced by the fact that we'd already nicked the foam during fridge fitting trials). 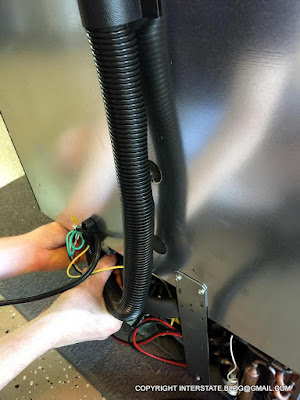 And speaking again of space, finding 0.7 planar cubic feet is also golden.  At first my husband was not convinced that storing a Rumpl next to the fridge was such a good idea.  Then he actually heard the Vitrifrigo compressor with his own ears, the Danfoss compressor that is widely rumored to be silent.
Oh, and let me not forget to make this important point.
And now for the money shot...
And also the money shot on Danfoss compressor noise attenuation...
And the money shot showing that the serendipitous noise attenuator is not impinging upon the coil...
And the big question - how does this fridge perform?
We plan to run a bunch more tests today, with the thermostat turned down further, and also we want to track power consumption with respect to the batteries.  I'll update this post with any significant findings.

Edit, same-day:  The fridge immediately dropped into the 30's when I turned down the thermostat.  And this despite the side of the van being too hot to touch with the fingers in our blazing heat. 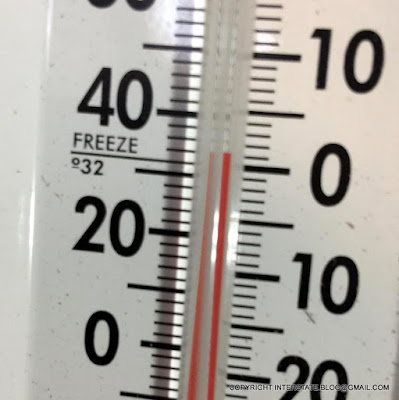 Second Edit:  Here's what our BMS (Electrodacus) looked like overnight as it was cycling.  My husband surmises that the compressor ran about one third of the time.  Overnight low temps in our area were probably around 75 degrees (we're located in the subtropics).  I think you can see the effect of the "soft start" multi-speed compressor here (all those spikey narrow peaks). 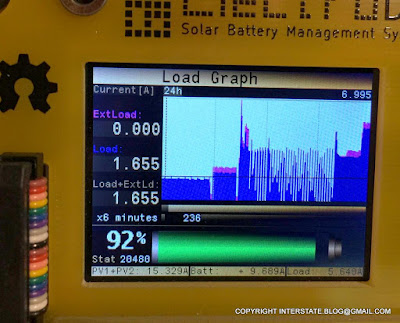 Here is the Cruisers Forum thread that corresponds to this blog post BTW.  And here is the Air Forums thread that includes discussion of some of the same content.

Posted by Interstate Blog at 5:26 AM