UNDER CABINET SHELVING FOR THE AIRSTREAM INTERSTATE

I bet that I'm not the only T1N Airstream Interstate owner who has pondered this question: 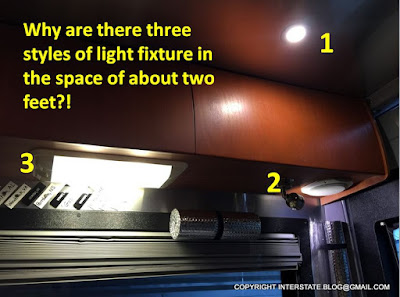 We use 1 (overheads) and 2 (spotlights) all the time, but never in almost two years of ownership have we ever had occasion to use 3 (formerly fluorescent tube, since converted by us to LED).

Those formerly-fluorescents did not bother me until I spent 17 consecutive nights lying in bed staring up at them.
They do not bear any stylistic resemblance to the rest of the Interstate build.  Furthermore, the plastic had begun to yellow with age, which made them look even cheaper than they already are.  They were a blight upon the Interstate's otherwise exquisite design, so I had to either replace them or remove them.  Given that we don't ever use them anyway, I chose removal, because I hatched another plan to maximize the utility of this valuable but wasted space.
I'm going to walk through a series of photos here that show my thought process on developing this project.  I like to encourage people to tackle projects even if they are not mechanically-inclined - it's fun and it helps stimulate the brain and ward off gray-haired dementia.  Skilled DIYers may find this presentation a bit tedious, but my point is to show that this kind of thing can be executed if tackled methodically, even by people with limited technical and design skills.

OK, so I had an inkling that I would like to put a shelf beneath this cabinetry, to help tame the Clutter Monster that constantly impacts life in a Class B where there are few storage surfaces upon which to simply "set things down".  The shelf must reflect the same sophistication and design quality that characterizes the rest of the Interstate build.  How to begin?
After measuring has been completed, the next step is to create a mock-up to test the design concept. In an ultra-small space, being off by as little as an inch can really impact the appearance and functionality of a modification.  Such mistakes can be minimized if the end result is visually verifiable in advance.
I can't say enough good things about the cardboard mock-up process.  It's time well-spent because it can reveal a sense of a finished product the way no other approach can.
You can see from that pic above that I was honing in on two changes relative to the original light fixture and cabinet configuration:

For the shelf material, I chose the same perforated aluminum sheet as I had used for my computer table.  Cross-referencing (what professional designers often call "repetition") is essential if the final look is to be pleasing and cohesive.

Now, I'm going to skip a lot of detail in this next part and just cut to the chase.  Suffice it to say that I spent hours pondering many, many different approaches to hanging these shelves.  Finding what I consider to be an optimal solution was not any easy process, and I probably uttered more expletives during this project than during our solar project and hitch carrier project combined.  But in the end, here's how it went down.
Here are the pieces of hardware upon which we settled (the bolt and tee nut being visible in the pic above).
At every step in this project, I measured and re-measured.  You only get one shot at making eight new holes in Airstream cabinetry.  The placement absolutely cannot get screwed up.
Most of my expletives were uttered because of challenges presented by the "triangular" Airstream cabinetry.
That rear strapping member resulted in this change to my original plan:

I temporarily removed my clothing organization system and permanently removed the offending light fixture.
This was almost entirely my project but my husband helped with this part.
This next part is key.  Again, if you do a project like this, you absolutely cannot be off on your hole spacing.
Once all the holes had been drilled, it was a simple matter of lifting the shelf and its bolts up and passing the bolt ends through the drilled holes.  Then popping a tee nut on each one and screwing them all to the same level (flush with the upper surface of the tee nuts).
And now for a couple of money shots:
Before and after money shot. 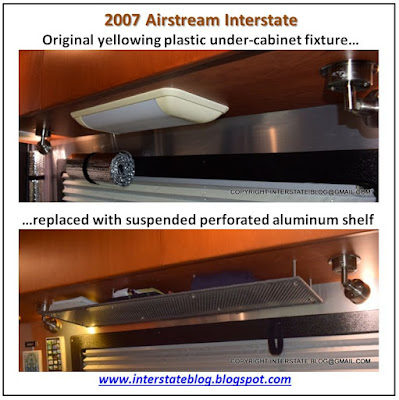 Now all I have to do is repeat the same process all over again for the second shelf, which will go above my husband's side of the bed.

Posted by Interstate Blog at 6:39 PM