TOWING AN UPFIT T1N SPRINTER: YOU NEED TO KNOW THIS STUFF

The story I tell below, I already knew it.  And I knew that everyone who has experience with T1N Sprinter towing knows it, if they happen to be upfitted.  But here it is in detail for the record, so that it will hopefully save someone else some pain, anguish and expense:

It's that simple.  Shims, or you're screwed  - take your pick.

By shims, I mean lengths of really heavy lumber, preferably hardwood because we are talking about one ton per tire, which can shallow up the tow bed angle enough to get this kind of job successfully done.

Let me walk you step by step through my mishap so that you can understand exactly what I mean.

So this afternoon, I'm heading east on TX-71 between Bastrop and Smithville when all of a sudden, my engine blows up, basically.  By the grace of God, I manage to get safely off the highway.
If your T1N unexpectedly blows up for no apparent reason despite the thousands of dollars of bulletproofing you've done on it, the best thing you could do is get your lead mechanic on the phone ASAP.  For me, that is Joel Sell, aka Million Mile Sprinter.

I emailed Joel a 6-second video of the engine plus a description.  Clearly it lost turbo, but it didn't feel to me like a normal turbo issue.  The van was running rough like I've never seen it do, and I had even less functionality at my disposal than I would during a regular limp home mode (LHM).  I've driven a hundred miles in LHM.  It's ugly, but it can be done.  This thing I was confronted with today... I was never going to make it down the road.

OK, so, Joel's recommendation was to flat bed it the hell out of there.  I concurred.  I got with my roadside assistance (I use Good Sam) and arranged for a tow.

It actually showed up as a flat-bed, but not the larger size I was hoping for.  Technically, this size can haul a T1N Sprinter as I said.  It's just a poor idea to try.

You can immediately sense a departure angle issue. 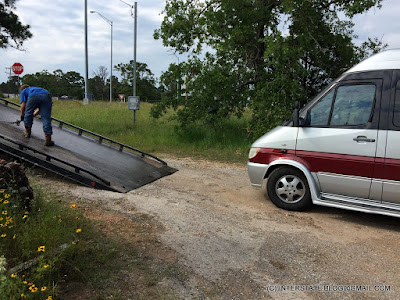 Incidentally, I'm not revealing the tow operator, because I feel bad for the guy.  He was a really nice guy and he tried his best, but he was young and inexperienced, and he didn't have the right materials in his kit.  I'll tell you what - he will be a lot more experienced when he wakes up tomorrow vs. waking up this morning.

OK, so, both the terrain and the substrate were favorable for the load-out despite the departure angle problem.  The van's skid plates dug in, but this part of it was do-able without too much drama, as you can see here.
In this next pic, you see what a T1N looks like on the back of this kind of flatbed.  It's really too big even if it's legal.
Because I was remaining overnight with my van, Freightliner would not allow me within their fenceline.  Therefore, the tow operator had to deposit this load on the public street in front of Freightliner.  That's where things got ugly, because the off-loading environment was not as forgiving as the on-loading environment had been.
I say again:  I haven't spent the last 4.5 years on internet forums for nothing.  WE KNOW from experience that we need shims for this.  I went into the Freightliner business, and scrounged up what wood scraps I could find.

There's a little piece of wood, but that's not going to get this job done. 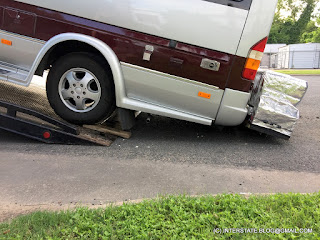 Not this either, although that was a nice piece of hardwood dunnage. 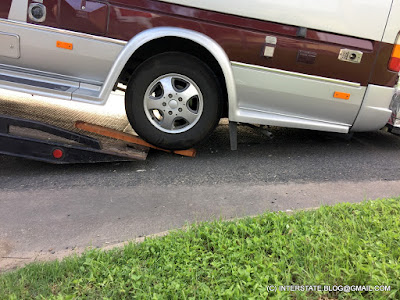 Next!  Nope; not this either. 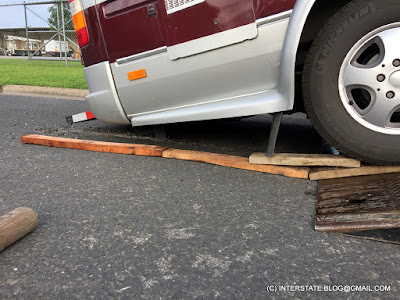 Here's a close-up showing the skid plates and how they were carving out their own little trenches in the asphalt.  On an ordinary day, I would have gotten down on the ground with my wrench and removed those skid plates.  But once the thing is in tow under someone else's control, for liability reasons, I can't touch it.  So we were stuck with this status quo. 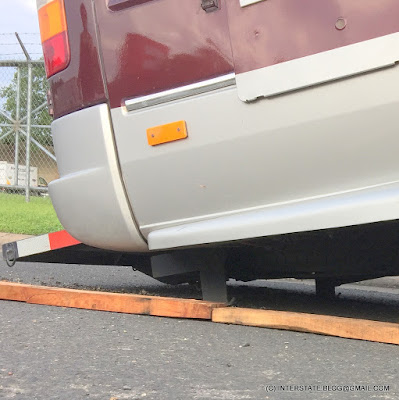 Then things went from bad to worse, as this picture suggests.  Do you see how there is a GAP between the bottom of the flatbed and the top of the pavement?  That's because, without proper shims, the operator had no choice but to basically roll the tow truck out from under the T1N Sprinter.  This is highly dangerous, but given the materials at hand, it was difficult to identify an alternative in the moment 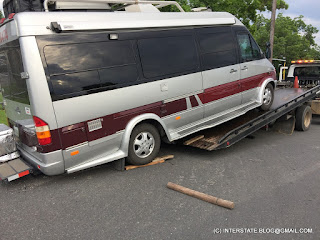 It was not going that badly, until he lost control of it.  Remember, the Sprinter has to have its transmission in neutral during this process.  And it's on this angle.  So, without his ability to keep tension on the tow line, that Sprinter is going for a ride under the power of nobody.  Which is exactly what it did.  It dropped off the flat bed, rolled backwards, and plowed arse-first into a Freightliner that happened to be parked at the curb behind us.  It literally bounced off the Freightliner and landed in the position you see here. 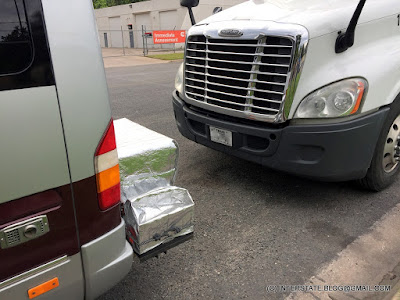 I have to have my husband evaluate this further, but at first glance, the score was Sprinter 1, Freightliner 0.  The Freightliner's bumper wasn't nearly as robust as the custom hitch carrier that my husband had welded up to be as strong as a proverbial brick shit house (excuse my language, but there's no other way to put it).  The bumper cover ended up askew.  Do you see how it's gapping at the far left, more so than on the right side under the headlight?   Uh-huh. 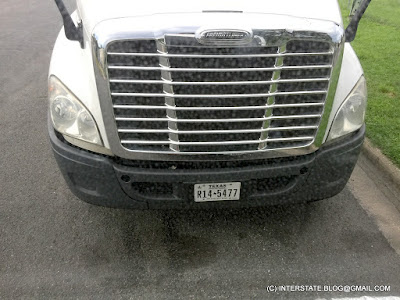 Anyway, frankly I'm glad the Freightliner was there to serve as our collision post, because I'm not sure where my Sprinter would have stopped rolling otherwise.

My front end (ground effects) was also damaged by the tow cable during this run-away event.  It's nothing that can't be fixed, but it's a pain.

MORAL OF THIS STORY:  T1N SPRINTER TOWS NEED SHIMS IF THEY LOADED ONTO THE SMALLER FLAT BED TRUCKS.  WEIGHT COUNTS FOR ALMOST NOTHING IN THIS ANALYSIS - IT'S ALL ABOUT GEOMETRY.

When roadside assistance is paying the bill, the tow companies are going to want to send the smallest flatbed they can to do this job, and it's a penny-wise pound-foolish decision.  Whatever they save in equipment costs, they are highly likely to incur ten-fold in damages.  Unless they carry really long heavy wooden shims, stuff like this is always going to happen.

Of course I knew that years before today, and obviously after today I'm going to consider transporting MY OWN shims, possibly under the chassis.  Because my van, you see, keeps breaking down.  No matter how hard I try, nor how much money I spend on it, it just keeps happening.  So far, at least.  Maybe when I finally get to Million Mile Sprinter later this summer, I can finally make some bulletproofing headway.

Oh, and by the way, I don't know what's wrong with it yet.  I'm camped out in front of a Freightliner that is unknown to me, in a city that is not mine, waiting until they open in the morning so that they can look at it. 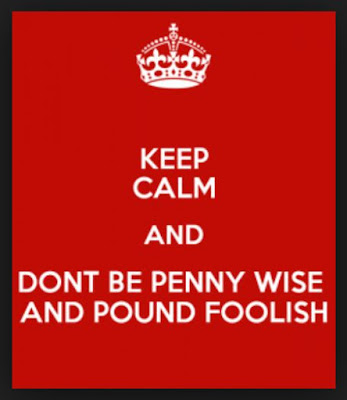 Posted by Interstate Blog at 7:28 PM