After more than four years of Airstream Interstate Class B campervan ownership, I am routinely amazed that I can still discover new modifications that result in large efficiency gains.  This is one of them - a valuable capture of roof space that has historically been underutilized.

I found a storage device that fit this space like a glove, but it's not what I had originally envisioned.
I used one of my favorite products as the underlayment on the roof, to allow for air circulation and drying, so that the ATV bag would not trap moisture next to the metal.
Bonus with the Taskmaster: it could be pulled off the roof and used as a traction assist device if I ever got stuck.  I used a third of one of these mats to underlay the ATV bag, and I'll probably find another reason to put the other two thirds up on the roof eventually.

Here's what the ATV bag looks like positioned to fit:
I mentioned above that I didn't need to use the referenced clamps that I originally thought I would need.  Given the way the thing butts up against the 8020 solar panel frame, and given that existing hold-down straps were mounted on the bag in key areas adjacent to the frame, I decided to use screw eyes instead.  My husband sourced stainless steel eyes and also bolts that were compatible with the 8020.  With those in place, I simply attached the bag using 175 pound zip ties.  Here are a few pics.

Detail of how this attaches:

(1) The bag is attached to the Taskmaster rubber underlayment mat using the straps that would typically attach it to the back frame of an ATV.

(2) The rubber underlayment, in turn, is attached to the roof rack using 175-lb zip ties.  This commercial grade rubber mat is extremely strong and it would take tremendous force to rip through it (these mats are so tough that one of my professional clients uses them in a petrochemical plant application).  I don't anticipate any issues with it.

Now, you may be wondering two things.  First, what the heck do I put way up there?

Answer:  Necessary junk that would otherwise consume valuable space inside the van. Nothing expensive that it would hurt to lose if a thief got his nosy self up there (which is unlikely).
Secondly, how the heck do I get up there to load and unload the bag?!  It's ten feet in the air!
The hitch platform is covered in non-skid tread, plus the ladder is secure.  It's actually safer in this configuration than it is when I'm using it on open pavement.

Anyway, I'm delighted with this mod.  Glad I found an appropriate bag to create this most unlikely combination. 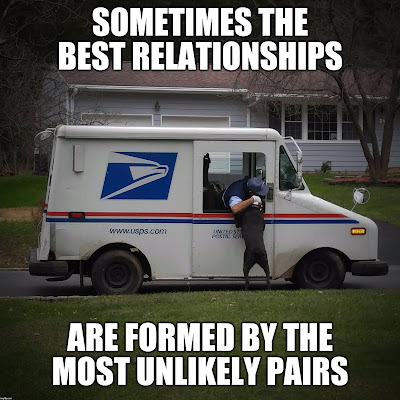 Posted by Interstate Blog at 4:05 PM